Or how to turn your soundcard into an efficient oscilloscope.

Here is presented the schematic of a simple probe to use on any PC soundcard in order to turn it into a powerfull Oscilloscope for DIY purpose.

The idea is to use the PC soundcard in its operational range as an Oscilloscope. Depending on your soundcard performance, signals up to half of its maximum operating frequency can be monitored (generally 44.1kHz). There are many softwares that can turn a Soundcard into an oscilloscope, they are not the purpose of this article.

I have designed a soundcard oscilloscope that runs in your browser.

The probe is composed of a simple stereo Jack connector with a few resistors to protect the Soundcard input interface.

Schematic is given herebelow:

It can be plugged into the Line In of any soundcard with DC protection (most of then have a capacitor) and it will work. It can sustain voltages up to 15Vdc without harming the Soundcard.

Here is picture of my DIY setup with this probe installed. Resistors are soldered on a Veroboard 5*5mm square and covered it with heat-retracting plastic tape. Added some letters to identify easily channel 1 and 2 and there we go !

I used a simple USB soundcard, and plugged the interface on the Line In. 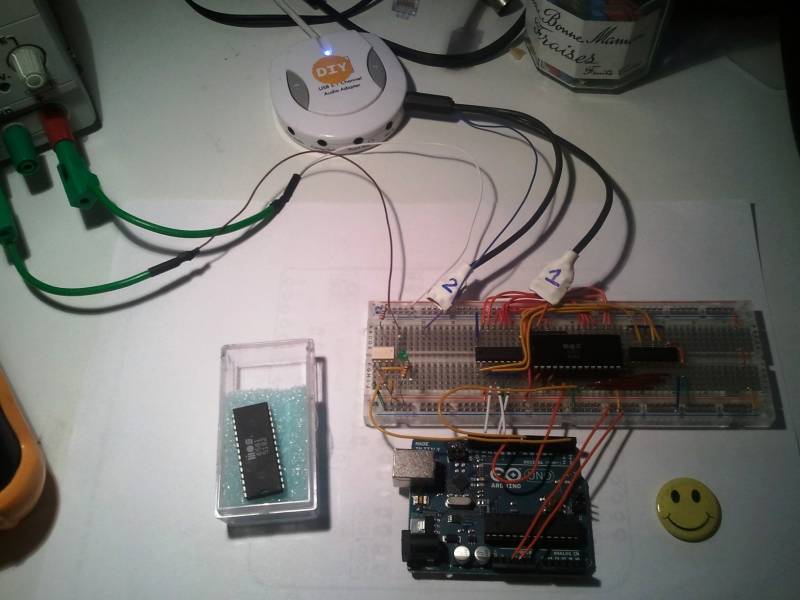